Advertisement
Advertisement
A-Mali | Arab Before Islam Part 1 - INVESTIGATION about the history of human civilization and where also its origin, is still something to do with our time. The investigation thus been long established, that the source of civilization dating back more than six thousand years ago is Egypt. Days before it is put into the category of pre-history. Therefore, it was difficult to be up to a scientific discovery. Scholars archaeologist (archaeological) is now re-organized excavations in Iraq and Syria with the intention of studying the problems of the Assyrian and Phoenician civilization and determine the age of onset than two kinds of civilization: is it precedes Egyptian civilization and at the same time influencing Pharaoh, or He followed that period and hence affected? 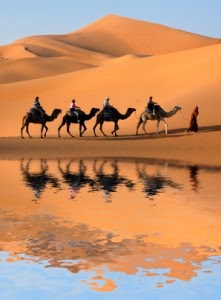 Whatever has acquired archaeological scholars in the fields of history, it will not change anything at all from the actual reality, which is in the excavation of ancient objects China and the Far East have not demonstrated the opposite result. The fact is that the source of the first civilization - whether in Egypt, Phoenicians or Assyrian - nothing to do with the Mediterranean Sea; and that Egypt is the most prominent centers of civilization first bring it to a Greek or Roman, and that the present world civilization, a period of our lives today, is still closely related to the first civilizations.

What was once shown by the Far East in penyelidikam about the history of civilization, never gave a clear influence on the development of civilizations Pharaoh, Assyrian or Greek, also never change the purpose and development of these civilizations. This had happened after there acculturation and mutual relations with the Islamic civilization. This is where the interplay that happens, the process of assimilation that has been such that the effect found on the handle of world civilization of mankind today.

Civilizations were already so developed and spread to the shores of the Mediterranean Sea or in the vicinity, in Egypt, in Assyria and Greece since thousands of years ago, which to date remains admired's development: progress in science and technology, in the field agriculture, trade, warfare and in all areas of human activity. But, all of that civilization, and sources of growth, always comes from religion. It is true that the source is different between Ancient Egyptian trinity belief is reflected in Osiris, Isis and Horus, showing unity and embodiment of life back in the country and life eternal relationship of father to son, and between paganisma Greece in delineating the truth, goodness and sourced and grown beauty of natural phenomena based on the senses; Thus after that arise differences with such depictions in various age setbacks it has delivered it into the earthly life. However, the source of all civilization that continues to shape the history of the world, which is so strong influence until we are now, even if such civilizations would try to escape and fight its own resources from age to age. Who knows, the same thing will eventually come back to life.

In these communities, which rely civilization for thousands of years to the source of the religion, in an environment that is born of the apostles who brought the religions we know today. Moses was born in Egypt, and in the lap of Pharaoh, he was raised and nurtured, and in the hands of the clergy and religious leaders that he knows the unity of the kingdom of God and the mysteries of nature.

After the permission of the Lord came to him that he may guide people in the middle of the Pharaoh who said to his people: "I am the supreme god" He came to dealing with the pharaoh's own and their magicians, so that eventually forced it together the people of Israel, others moved to Palestine. And in Palestine is also born Jesus, the Spirit and the Word of God which is blown into the self-Mariam. After the Lord Jesus the son of Mariam pulled back, the students then spread Christianity that Jesus recommended. They and their followers suffered persecution assortment. Then after the Lord's will is spread religion, which came to Maharaja Byzantine rule the world when it was, brought the banner of Christianity. The whole Roman Empire has now embraced the religion of Jesus. Tersebarlah this religion in Egypt, in Sham (Syria-Lebanon and Palestine) and Greece, and from Egypt spread to Ethiopia. After that for several centuries of religious power is getting stronger, too. All under the banner of Byzantine Empire and who want to hold friendship and good relations with this kingdom, under the banner of the Christian religion.

Dealing with religion spread AD under the banner and the Byzantine influence also stood in the Persian Zoroastrian religious power that gets moral support in the Far East and in India. For several centuries the Assyrians and Egypt that stretches along the Phoenicians, had blocked the occurrence of a direct battle between belief and Western civilization to the East. But with the entry of Egyptian and Phoenician into AD environment has also eliminate those obstacles. AD understood in the West and in the East Majusi now face to face. For several centuries in a row, both Western and Eastern, with trying to honor their religion, which was originally faced with natural obstacles, are now confronted with moral barriers, each felt the need to desperately trying to maintain trust, and each other do not affect each belief or civilization, even wars between them were ongoing until so long.

However, although the Persians had been able to defeat the Byzantine and can master the Sham and Egypt and has reached also on the doorstep of the Byzantine, but it did not occur by the Persian kings will spread the religion of Zoroastrianism or the place of Christianity. Even the ruling party was in fact respect the beliefs of people under their control. Synagogues those who have been devastated by war also helped rebuild and allowed to freely practice their religious ceremonies. The only thing that is done the Persians in this case is simply taking the Great Cross and brought to the country. When later the victory was changed was in the Romanic Cross and even then taken back from the hands of the Persians. Thus the spiritual battle in the West was still in the West and in the East remained in the East. Thus the moral obstacle was equally well with natural obstacles and the two powers of the spiritual aspect does not collide with each other.

Similar situation lasted until the sixth century. In the meantime, the opposition between the Romanic Byzantine more tapered. Romanic party, whose flag fluttering in continental Europe up to Gaul and Kelt in the UK for several generations, and during the time of Julius Caesar is proud of the world and still be proud of its glory it has gradually receded, until finally the Byzantine secede with its own power anyway, as heirs Byzantine Empire was ruling the world. The collapse of the Byzantine Empire was the peak forces when it comes savage Vandals invaded and took control of government in his hands. These events have caused deep scars on growing religion in the lap AD Roman Empire. Those who have faith in Jesus that has experienced great sacrifices, are in fear under the rule of the Vandals.

AD religious schools is beginning to break the centuries-belah.Dari schools it has been divided into sekta-sekta and factions. Each group has the view and the basics of religion itself as opposed to any other group. Contradictions between factions each other because of differing views that has resulted in the existence of a personal feud carried by as moral and soul already weak, so quickly once he is in fear, is involved in fanatisma blind and in the ice. At those times, among those groups AD was no denying that Jesus has looked a shadow beside the bodies of humans; there is also a spiritual mempertautkan between body and his spirit such that it requires imagination and mind are so complicated to be able to describe it; and besides that some are willing to worship Mariam, while others reject the idea that she remained a virgin after childbirth Christ.

Conflicts between fellow followers of Jesus it is an event that commonly occurs in every race and age, when he was in decline: because only limited to the theory of words and numbers alone, and in every word and every number was interpreted also with various -macam sense, coupled with secrets, coupled with a colorful imagination that difficult to accept reasonable and can only be chewed by debates sophisma rigid alone.

One pastor said: "All over the city was overwhelmed by the debate. One can see it in the markets, in places where the seller of clothing, money changers, food merchants. If anyone intends to want to swap a piece of gold, he will engage in a debate about what is created and what is not created. If anyone wanted to bid the price of bread will not answer: the Father is greater than the son and the son is subject to the Father. If anyone asks about the swimming bath warm water is there, the servant will be answered:
"Prince has been created out of nothing."

But the setbacks that have happened to religion AD so he divided into factions and sekta-sekta was politically not so great influence on the Roman Empire. The kingdom remained strong and firm. Factions and even then still lived under the shade with a permanent existence of such a conflict but not until people engage themselves into polemical theology or to enter such meetings ever held in order to solve something of a problem. A decision ever taken by a group not to bind other groups. And the kingdom had also protect all the groups and give them the freedom to hold a debate, which actually adds to the strength of the Kingdom in the field of administration without compromising his respect for religion. Each group will happen depends on the mercy of the authorities, there is even a suspicion that the groups cleave to the recognition of the ruling party.

Mutual adjust under the auspices of the Empire that was also the cause of the spread of AD is still running and can be passed from Egypt to Ethiopia under Romanic independent but still in an environment of friendship with Romanic. Thus it has an equally strong position along the Red Sea as around the Mediterranean. From Sham region he crossed over to the Palestinians. Palestinians and Arab residents who moved there Ghassan has also embraced the religion, to the beach Furat, residents of Hira, lakhmids and Mundhir who move from the barren Sahara inland to the fertile areas, too, which then they live in that area a couple then long to live under the rule of the Persian Zoroastrians.

In the meantime, life Zoroastrianism in Persia has also suffered a setback as Christian religion in the Roman Empire. If the Zoroastrian religion of fire worship was the most prominent symptom, then with respect to the gods of good and evil followers had broken to-split also be factions and sekta-sekta anyway. But here is not the place decipher it all. Even though so political power remains strong Persian as well. Religious polemic about painting gods and their free thinking behind the painting depicted, not influence it. Denominations which different it all shelter under the Persian king. And that further strengthens the contention is that it is deliberately used as a way to one another so that each berpukulan, on the basis of anxiety, when one of them becomes strong, then the king or one of the parties is going to bear the consequences.
Advertisement