IN THE MIDDLE caravan road opposite the Red Sea - between Yemen and Palestine - rows of hills stretching as far as approximately eighty kilometers from the coast. The hills surrounding the valley which is not so broad, that is almost entirely besieged by hills that are not opened by three roads: the first road leading to Yemen, which is second in the road near the Red Sea port of Jeddah, the third way leading to Palestine. 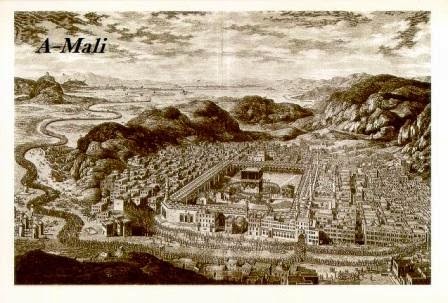 In a valley surrounded by the hills that lie Mecca. To know the history of the building of this city really difficult at all. Maybe once he left for the past thousands of years ago. To be sure, the valley was used as a caravan stop while resting, because in that place there is a water source. Thus the caravan rornbongan spread their tents, both of which came from the direction of Yemen to Palestine or who come from Palestine towards Yemen. Maybe once Ishmael son of Abraham was the first to make it as a place to stay, which before was only used as a last caravan alone and trade exchange between those who come from the southern peninsula to the contrary from the north.

When Ishmael was the first to make Mecca as a place to stay, then the history of this place before it was dark. Maybe it can also be said, that this area used places of worship as well before Ismail came and settled in that place. The story of his arrival to the place and even then force us to bring the story of Ibrahim briefly.

Ibrahim was born in Iraq (Chaldean) of a carpenter father statue maker. The statues were then sold to the people themselves, and worshiped. After she was a teenager how he saw the sculptures made by his father was later worshiped by the people and how did they give respect and sacred to the piece of wood that his father never done it. Sense of suspicion began to arise in his heart. To his father he never asked, how their crafts were to be worshiped person?

Then Ibrahim tell it to others. Ayahnyapun very concerned about their children's behavior; because he feared it would rnenghancurkan trade. Ibrahim himself a believer in the sense mind. He wanted to prove the truth of his opinion that the reasons are acceptable. He took the opportunity when people are careless. He went over to the gods, and the idol was destroyed, except the biggest idol. Now we know the people, they said to him:

Abraham did that after he thought about how wrong they worship idols, otherwise who should they worship.

Ibrahim was not able to persuade people. In fact, in reply he cast into the fire. But God still save him. He fled to Palestine with his wife Sarah. From Palestine they proceeded to Egypt. At that time Egypt under the rule of kings Amalekit (Hyksos).

Sarah is a beautiful woman. At the time of the Hyksos kings used to take women married the pretty ones. Ibrahim shows, as if she was his brother. He was afraid of being killed and Sarah will diperisterikan king. And the king was meant to be memperisterikannya. But in his sleep he dreamed that Sarah married. Then returned to Abraham as he scolded. He was given several gifts of which a girl named Hajar- Olelm purchase because Sarah after many years with Ibrahim yet also obtain offspring, then by Sarah shaved he hangs out with Hagar, who not long afterwards, having a child, Ishmael. After the great Ismail then Sarahpun obtain offspring, namely Ishaq.

Some experts disagree about the slaughter Ismail and sacrifice which have been presented by Ibrahim. Are there any before or after birth Ishaq? Whether it's happening in Palestine or in the Hijaz? Jewish historians argue, that are slaughtered it was Isaac, not Ishmael. Here we are not going to test the disagreements that. In Qishash'l-Anbia 'Shaykh Abd'l Wahhab an-Najjar argued, that it was Ishmael slaughtered. This argument taken from the Torah itself that the slain were described as children of Abraham only. At that time, Ismail was the only child before Isaac was born. After her birth, the son of Abraham is no longer single, but already there Ismail and Ishaq. By taking the story was supposed to be the story of slaughter and redemption took place in Palestine. It can indeed be so if that meant it to happen to Isaac. During that Ishaq with her mother only lived in Palestine, never go to the Hijaz. But the story that says that the slaughter and redemption took place on the hill Mina, then this certainly applies to the self-Ismail. Therefore in the Qur'an does not mention the name of the victim's person, then historians Muslims divergent opinions.

About sacrifice and redemption of the story is that Abraham had a dream, that God told him that his son was offered as a sacrifice to the slaughter. One morning he went with his son. "When he had reached the age enough to try, he (Abraham) said: 'O my son, the sleep I dream, that I sacrifice. Look, what do you think? 'He replied:' O my father. Do what you ordered. If desired of the Lord, will kaudapati me in patience. "After both surrendered and laid him next to his forehead, he we call: 'O Abraham. You have carried out the dream. "By doing so, we give a reply to those who do good. It is a real exam. And we make it up with a great sacrifice. "(Qur'an, 37: 103-107)

Some stories describe this story in the form of a beautiful poem once, so here we need to put forward, though not bring the story of Mecca. The story, after Abraham had a dream in his sleep that he should slay his son and ensure that it is the Lord's command, he said to his son: 'My son, take the rope and the machete, let's go to the hill looking for wood for our family.' Child rose by his father's orders. When it comes demon in the form of a man, the boy's mother came and said: 'Do you know where Abraham brought your son?' 'He went in search of wood from the hillside,' replied his mother. 'No,' said the devil again, 'he went to be slaughtered.' Mother replied again: "No. He is more dear to her. '' He claimed that God commanded it. '

'If that is indeed the command of the Lord let him obey his commandments,' replied the mother. Satan was then left feeling disappointed. He soon followed children who are following his father's. To children and even then he said to his mother as before. But jawabannyapun same with her answer as well. Then the devil came to Abraham and said, that his dreams were only deceptive demons and slay his son so that he will eventually regret. But by Ibrahim he left and dilaknatnya. With the annoyance it would depart regularly, because the intention was not successful, both of Ibrahim, from his wife or their children.

Then it was Ibrahim told her about his dream and asked for his opinion. 'Dad, do what they're told. "Then he said again in the ballad:' Father, if you will menyembelihku, strengthen the bond that my blood is not in contact with his father and later will reduce pahalaku. I do not guarantee that I would not be anxious if implemented. Tajamkanlah the machete that can simultaneously cut me off. When the father had laid me up for slaughter, telungkupkan me and not tilted. I'm afraid that someday see my face father father would be weak, so will hinder the purpose of God's dad carrying out orders. If the father believes will bring the clothes to the mother in case a form of entertainment for him, do it, father. '

'My son,' said Abraham, 'This is a great help in carrying out the commands of Allah.'

Then he was ready to perform. Bound tightly by the hand, and laid his forehead for slaughter. But then he was called: 'O Abraham! You have carried out the dream. "The child was then redeems with a large sheep which are not far from that place. Then slaughtered and burned.

Ishaq has been a great addition to Ismail. Father's affection equally to both. But she became very upset to see her son was equated with the child Hagar her ladies. He vowed not to live together with Hagar and her son Ishmael when he saw his brother's hit. Abraham felt that his life would not be happy if the two women stay in one place. Therefore he went down with Hagar and the boy toward the south. They came to a valley, where the current Mecca. As we mentioned above, this valley is where the caravan spread his tent at the time they cross paths with a caravan of Sham to Yemen, or from Yemen to Sham. But at the time it is the most quiet throughout the year. Ibrahim Ismail and his mother by abandoned and left behind also his needs. Black makes a shack where he was sheltering with his son. And Ibrahimpun back into place.

After running out of water and supplies, Hajar look right to left. He did not see anything. He kept running and went down to the valley in search of water. In running it - according to the story - between Safa and Marwa, to complete seven times, he returned to his son with a feeling of despair. But when she saw her son are digging the ground with his feet, who then came out of the ground water. He and Ishmael can release thirst. Disumbatnya lest the spring flows continuously and absorb into the sand. Child with his mother's help the Arabs who were on their way, and they got the reward that will be enough to ensure their survival in the caravan coming season.

Spring water gushing from the well of Zamzam was attractive to some tribes would live near that place. Some information says, that is the first Jurhum tribes once lived in that place, before coming Hagar and her son. While others argue, that they stay in place after the source of the well of Zamzam, allowing them to live in the arid valley.

Ismail is getting bigger, and then he married a girl Jurhum tribes. He was with his wife lived together Jurhum another family. In place of the shrine has been built, which then stood around the place anyway Mecca.

Also mentioned that one day Abraham asked permission to Sarah will visit Ismail and his mother. This request was approved and he was gone. After he searched the house and met Ismail he asked his wife: "Where is your husband?"

"He was hunting for our lives," he said.

Then asked again, he can entertain food or drink, answered that he did not have anything to be served.

Ibrahim left, after saying: "When your husband comes to convey my compliments and tell him:" Change the threshold of your door. "

After his father's message is then delivered to Ismail, he immediately put away his wife, and then remarried with other Jurhum woman, daughter Mudzadz bin 'Amr. This woman has welcomed Ibrahim well after some time and then he never came. "Now the threshold of your door already strong," (said Ibrahim).

From this marriage Ismail had twelve children, and these are to be the forerunner of the Arab al-Musta'-usury, the Arabs who met on the mother's side Jurhum with Saudi al-'Ariba descent Ya'rub ibn Qahtan. Being their father, Ishmael son of Abraham, of the mother closely related to Egypt, and from the father with Iraq (Mesopotamia) and Palestine, or anywhere Ibrahim set foot.
Advertisement