Advertisement
Advertisement
A-Mali | Quraisy Cultural History of Civilization Part 4 - Pitch black night when they think of going to leave the city and where also will live. That night Abd'l-Muttalib went with some of the Quraysh, gathered around the door of the Kaaba. He plead, they beg for help idols against Baitullah aggressor will destroy it.

When they were gone, and the whole Mecca silent and it was time to deploy troops destroy the Kaaba Abraha and thereafter will return to Yemen, when it also comes raging smallpox epidemic override Abraha forces and destroy them. This attack is tremendous, had never experienced before. Perhaps the plague germs carried by the wind coming from the direction of the sea, and. infectious overwrite Abraha himself. He felt frightened at all. Troops were ordered to return to Yemen, and those who had already fled into the guide, and some are dead. This outbreak Disaster increasingly raged and members of the troops who died had countless mention the many. 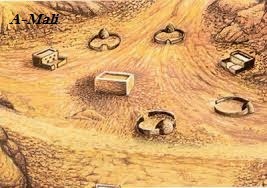 Until also Abraha to Sana 'but the body is seized with illness. Not long afterwards he too died as members of other forces. And thus the people of Mecca record as the Year of the Elephant. And this is enshrined in the Qur'an:

"Do not you see, how thy Lord dealt with the forces Elephant? Is not he thwarted their plans? And released at the top of their troops birds. Stone them hard to burn. So they are like dead leaves scattered perish. "(Quran 105: 1-4)

This extraordinary event further strengthens the position of Mecca in the religious sense, in addition, it has strengthened its position in terms of trade also. Also cause the population more attention and maintain a high position and privilege it and defend it from all the effort that would prejudice or would phon, the city rang. The Meccans more excited again defend their city, remembering the life that they earn thereby, affluent and luxury as far as we can imagine the luxury of their lives in the desert-sand, the arid and barren.

Craze extraordinary inhabitants of this area are drinking nabidh (liquor). In a drunken state that they find an unrivaled pleasure! A pleasure which will facilitate their lasciviousness, would make maids and slaves were bought and sold as merchandise was more captivate them. Such is encourage them maintain personal freedom and freedom of their city as well as the awareness of maintaining independence and fend off attacks that may come from the enemy. That's most convenient for them to have fun during the night while having a drink only in the city center around building the Kaaba.

In that place - in addition to three hundred pieces of idols or more, each of the tribes with their idols - dignitaries and leaders of Quraysh of Mecca sitting; each telling matters relating to the state of the interior, with Yemen, people Mundhir in Hira and Ghassan people in Syria, about the arrival of the caravan traffic and people inland.

Such occurrences up to them in the form of a story, of a tribe to another tribe. Each tribe has a "transmitter" and "receiver" who received the news and then broadcast back. Each carried a story that has to do with the news of the hinterland, the stories of neighbors and relatives-Tolan and drinking nabidh. And after they spend the night all night in the Kaaba they prepare themselves for the same thing in order to better satisfy the will desires-desires. With an eye gemstone idols visit look to those who are trading it, and they feel protected, because it is used as Houses of the Holy Kaaba and Mecca became the city safe through. Likewise idols they guaranteed that no one would enter Mecca of the Book except labor will not talk about religion or his book.

That's why there was no such Jewish colonies in Jathrib or Christians like in Najran. In fact: the Kaaba which is used as the most sacred place paganisma when they are protected from all that would be insulted, and they took refuge there from all attacks. So it went on Mecca was free stand alone, such as the Arab tribes who are also free to stand on their own. They do not want that freedom was replaced, and they do not care about the way of life other than this freedom under the protection of idols. Each tribe nor disturbed, and did not occur to them will also hold a strong national unity, as is done by the Byzantine and Persian in the expanding power and make war.

Therefore keep it all the tribes do not have anything any form other than the ways of living inland, where they seek pasture for cattle, then living in the middle of it the rough way of life, attracted by all the freedom, independence, pride and heroism.

Basically places to stay in the environment surrounding the Kaaba Mecca. The distance to the houses of the Kaaba depending on the importance and the high position of something family or tribe. Quraishi is located closest and most widely associated with the Holy House. It is they who hold the key and Zamzam water management, as well as all titles of nobility according paganisma on them, which is to lead to war, therefore, led to the partnership, or treaties of peace between the tribes, which is kept inside the Kaaba, in order to witnessed by the idol and then lowered his anger for those who violate.

Behind the houses Quraish tribe followed rumah0rumah also somewhat less important position, followed by the lower again, to the dwellings of the slaves and the homeless countrymen. Including Christians and Jews in Mecca, as we mentioned earlier - are also slaves. Places to stay away from the Kaaba in fact they already bordering the Sahara. Therefore, their conversation about religion stories, either Christian or Jewish, not until near the ear and leaders of Quraysh of Mecca general population. Further their layout it actually makes them more tightly cover the ears. They do not want to concern themselves with it. On their way through the monasteries and monks places they typically have heard such stories.

It's just what we have begun diperkatakan the coming of a prophet in the midst of the Arabs at that time, has caused quite a scene. Abu Sufyan ibn Umayya never angry with Abi'sh-shalt because charcoal is often repeated story of the monks about the same thing. And perhaps corresponding to the position of Abu Sufyan also when it when he said to his friend: Monks was like bringing such stories because they do not understand about their own religion. They require very existence of a prophet who will provide guidance to them. But we already have idols, which will bring us closer to God, no longer need the same thing. We must oppose all such talk.

Can he talk like that. He, who is so fanatical to Mecca and paganismanya life, never imagined that the time is at hand, that the prophethood of Muhammad as imminent and that of the Arab lands diverse pagan monotheism was light and light of truth will shine throughout duniaAbdullah Abd'l-Muttalib bin is actually a young handsome and attractive. Attract the attention of girls and women of Mecca. Moreover that interest them is a story of redemption, and the story of one hundred camels are not willing to accept less than the Hubal. But fate had decided Abdullah would be a most noble father ever known to history. Aminah bint Wahb Likewise will be Abdullah's mother to child. He was married to the woman and every few months later he also died. There is no longer any such redemption shall deliver him from death. Staying again later would give birth Aminah Muhammad and would die during the birth was still a baby.

In the following picture explains the lineage of the Prophet which estimates the years of their birth.

1. The Sabian is meant here is not that the purpose of the Quran ( 2 : 62 ) , namely sekta Christians who hold to the Torah and the Gospel has not changed , but people who are called by Ibn Harran Taimia as the center of this group and as the birthplace of Abraham or where he moved and Iraq ( Mesopotamia ) . In this place there are temples where worship of the stars . Their confidence is before the advent of Christianity . After the coming of Christianity , their beliefs into the mix-up and is known as pseudo - Sabians . ( Quoted by al - Qasimi in Mahasin't - Ta'wil , vol 2 pp. 154-147 ) . Also they are not the same as the Sabaean from Saba in South Arabia ( A )
Advertisement