Advertisement
Advertisement
The Story Of Gharaniq Part 3/5 - Read before>>> Here Quraysh realized, that the suffering experienced by Muhammad and his companions, almost causing a civil war, whose consequences can not be imagined, and who else will perish. There were people from the tribes of the Quraysh and aristocratic families who had accepted Islam, they will then revolted if anyone from the clan was killed even though they were of different religions. Thus, in the fight against Muhammad this, they must memempuh a way that will not bring a result that is so dangerous. In addition, so that in this way can also be agreed upon by the Quraysh they hold a truce with the Muslims, so that none of them that were to be disturbed. This is what has come to the refugees in Abyssinia it, and get them thinking going back to Mecca 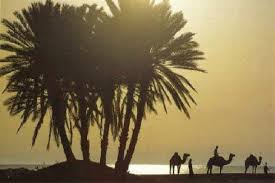 Second. Even though so, perhaps they still back and forth will also be back, if not because of the second reason which has strengthened their intention, which at that time was in Abyssinia was raging a rebellion against Najasyi, which waged because of an accusation against him. He is carrying out his promise and showed a sense of affection to the Muslims. Muslims themselves expressed the hope if God would win the Negus against his opponent's. But they themselves do not get involved in the uprising, because they are strangers, and again they belurn so long stay in Abyssinia. That which has come to them the news of peace between Muhammad and the Quraysh, a peace which saved Muslims from the disruption they have suffered, it would be better for them to leave the existing chaos and rejoined to their own families.

Here's what they have done all, or part of them.

However, before they get to Mecca, the Quraysh had again conspired against Muhammad and his companions. Tribes they already hold a joint written consent; they promised to hold a total boycott against Banu Hashim: will not buy and sell to each other.

With the agreement was an endless war between the two sides immediately he raged again. Now those who had returned from Abyssinia it back there again. With them were also people who still can go together. This once they face the violence of the Quraysh, who tried to hinder them want it moved.

So, not a compromise as mentioned Muir was the cause Muslims returning from Abyssinia, but because of the peace agreement as a result of Umar who had converted to Islam and fiery spirit defending this religion. So their support over the story gharaniq the grounds compromise, it is the support that has no basis at all.

As for the reasons stated by the authors biography, and experts in the interpretation of the verses: "And almost alone they were teasing you ...," and "And not an apostle or a prophet We sent before you, if he aspires, demons and put disorder into ideals that ... "is the reason that more chaotic than the arguments Sir Muir. Suffice it to mention that the first paragraph only in the word of God: "And if not, we tabahkan your heart, you almost inevitably tend also to those little things," for we have seen, that the devil has included interference into the ideals of the Messenger, so that almost any he tends to them a little; but the Lord strengthened her heart so as not to do, and if done well, God will inflict punishment doubled in life and death.

Thus, by bringing these verses as a reason, that reason is clear upside for.

The storyline of this gharaniq is that Muhammad had actually siding with the Quraysh and Quraisypun've actually also teased that he would say something that is not decreed by God. Medium verses here assert, that God has strengthened his heart, so he does not do that. When stated so, that the books of tafsir and causes down the Qur'an makes these verses can change gharaniq problem, we see that the reason is the exact opposite of the sanctity of the apostles in delivering their duties, and contrary to the whole history of Muhammad. One reason is chaotic, even weak at all.
Advertisement