When Was Muhammad Born in Mecca Part 1

AGE Abd'l-Muttalib had almost reached seventy years or more when Abraha tried to attack Mecca and destroy the Ancient House. When the life of his son Abdullah had twenty-four years old, and already the time comes mated. Abd'l-Muttalib choice fell to Aminah bint Wahb ibn Abd Manaf ibn Zuhra, - Zuhra tribal leaders when it's appropriate and age also have a respectable position. Then go begat sons were going to visit family Zuhra. He met with his son Wahb and apply daughter. Most chroniclers argue, that he went to see Uhyab, uncle Aminah, because at that time his father had died and she was under the care of his uncle. On the day of marriage with Aminah Abdullah, the Abd'l-Muttalib also married to Hala, daughter of his uncle. From this marriage was born Hamza, the uncle of the Prophet and the same age as him. 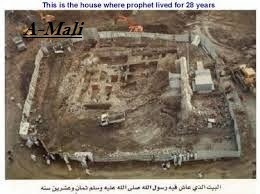 Aminah Abdullah to stay for three days at home Aminah, according to Arab customs when the marriage took place in the family home princess bride. Then they moved together into families Abd'l-Muttalib. Not how long before Abdullahpun go in an effort to Suria trade by leaving a wife who is pregnant. About this there are several different statements: is Abdullah remarried apart with Aminah; is there any other women who came to offer herself to him? It seemed pointless to investigate the particulars of this kind. What is certain is that Abdullah is a tall and handsome young man. It is not exceptional if there are other women who wanted to be his wife in addition to Aminah. But after his marriage with Aminah it goes the other despite expectations for a while. Who knows, perhaps they are still waiting for him to return from his trip to Sham to be his wife in addition to Aminah.

In the journey that Abdullah stayed for several months. In the meantime he went also into Gaza, and back again. Then he stopped to place his mother's brothers in Medinah simply rest after feeling tired during the trip. After that he will return home with a caravan to Mecca. But then he suffered a pain in his mother's brothers. Et kawannyapun first left her home. And they who delivered the news to his father's illness after they arrived in Mecca.

As soon as the news came to Abd'l-Muttalib he sent Harith - the eldest son - to Medina, in order to bring back when he had recovered. But when he got in Medina he learned that Abdullah had died and been buried anyway, a month after the caravan left for Mecca. Harith returned to his family with a feeling of melancholy over the death of her brother. Grief and sadness befall Abd'l-Muttalib heart, liver override Aminah, because he lost a husband who has been the hope of happiness of his life. Likewise Abd'l-Muttalib was very dear to him so that redemption against the idol in such a way unprecedented in the Arab society before it.

Abdullah relic after the death of five camels, goats and a group of slave women, namely Umm Ayman - who later became caretakers of the Prophet. Such relics may not mean a sign of wealth; but not also a poverty. In addition, the life of Abdullah who is still in the very young age, has been able to work and try to achieve wealth. In the meantime, he did not inherit anything from his father was still alive.

Aminah was pregnant, and then, as she gave birth to another woman. Done maternity sent news to Abd'l Muttalib at the Kaaba, that she gave birth to a boy. How excited old man after receiving the news. Once she thought of her son Abdullah. Once excited him because it was a replacement for an existing child. Quickly he went to the law, he lifted the baby and brought to the Kaaba. He was given the name Muhammad. The name is not common among Arabs but fairly unknown. Then the return of the child to his mother. Now they are waiting for people who would menyusukannya of Family Sa'd (Banu Sa'd), to then hand over the child to one of them, as has become customary Arab aristocrats in Mecca.

Abnormalities that opinion also regarding the day of the month he was born. One argument says on the second night Rabi al-Awwal, or the night eighth, or ninth. But in general said, that he was born on the twelfth Rabi al-Awwal. This is the opinion of Ibn Ishaq and others.

Furthermore, there are differences of opinion regarding the time of his birth, the day or night, as well as the birthplace in Mecca. Caussin de Perceval in the Essai sur l'Histoire des Arabes stated, that Muhammad was born in August 570, the Year of the Elephant, and that he was born in Mecca in the house his grandfather Abd'l-Muttalib.

On the seventh day of his birth Abd'l-Muttalib asked disembelihkan camel. It is then done by inviting dining Quraishi society. Once they learned that the child was given the name Muhammad, they wonder why he does not like to wear the name of ancestors. "I wish he would be the one who Commendation, one for God in the sky and the creatures on earth," said Abd'l Muttalib.

Aminah is still waiting to be handed his son to one family Sa'd who will suckle her child, as was customary in the Arab nobles of Mecca. Indigenous thus still applies to nobles of Mecca. On the eighth day after birth the child even then transmitted to the interior and new returning home to the town when he was eight or ten years. Among the tribes inland in nursing this famous among them is the tribe of Banu Sa'd. While still waiting for those who would suckle the child handed over to Thuwaiba Aminah, female slave of his uncle, Abu Lahab. For some time he disusukan, such as Hamzah who also later disusukannya. So they are milk sister.

Even Thuwaiba only a few days are nursing, but he still maintains a good relationship once during his life. After the woman died in the seventh year after he moved to Medina, to continue the good relations that he asked about his son who is also a milk brother. But then he learned that the boy had also died before her.

Finally came the women who will be nursing their family Sa'd it to Mecca. They're looking for a baby to be their Susukan. But they avoid orphans. Actually, they still expect something from the services of his father. Being of orphans little they can expect. Therefore, among them that no one would come to Muhammad. They will get decent results when families come they can expect.

However Halimah bint Abi-Dhua'ib which was originally rejected Muhammad, like the others, too, did not get another baby instead. In addition, because she was a woman who are less able, mothers lainpun ignored. Once agreed they would leave Mecca. Halimah said to Harith bin Abd'l-'Uzza her husband:
"Not happy I came home with my friends without carrying a baby. Let me go to the orphans and will be along too. "

"All right," replied her husband. "Hopefully, because the Lord would give a blessing to us."

Halimah then took Muhammad and carried away together with his friends to the interior. He told me that since he took the boy he felt blessed. Livestock goat fat and susunyapun increases. God has blessed all there is to it. For two years Muhammad lived in the Sahara, disusukan by Halimah and nurtured by Syaima ', his daughter. Air Sahara and rugged outback life causes it quickly becomes large, and add beautiful shape and body growth. After just two years and the time comes weaned, Halimah took the boy to his mother and then bring it back into the interior. This is done because the will of her mother, said a caption, and other information Halimah said because of the will itself. He was brought back to be more mature, it is also feared outbreak of the attack Mecca.

Two years the boy lived in the Sahara, enjoying the clear air inland and free, not bound by anything bonding spirit, nor by bonding material.

In those days, before reaching the age of three years, when that happens the story told many people. Namely, that while he was with his brother the same age among children are on the back of the house outside the family supervision, suddenly children of Family Sa'd it back home as he ran, and said to the mother-father: "Dear of Quraysh had been taken by two men dressed in white. He was laid, stomach surgery, while behind-feedback. "

And about Halimah There are also told, that the self and her husband she said: "Then I went with her father to that place. We met him was standing. His face was pale. I noticed him. as well as his father. Then we ask: "Why are you, son?" He replied: "I was approached by two men dressed in white. I was in the lay, then my stomach in surgery. They are looking for something in it. I do not know what they're looking for. "

Halimah and her husband returned home. The man was very scared, in case the child was possessed. After that, he brought the boy back to his mother in Mecca. Ibn Ishaq on these events bring a Hadith of the Prophet after his prophetic. But in telling this incident seems to Ibn Ishaq carefully and said that since the return to the mother not because of the story of the two angels, but - like the story Halimah to Aminah - when he was brought home by Halimah after weaning, there are some Abyssinian Christians attention Halimah Muhammad and asked about the boy. Rear saw the boy, and they said:

"Let us take our son to the king in our country. This child will become an important person. We who know the situation. "Halimah then quickly shy away from them by carrying the child. Likewise, the story brought by Tabari, but is still in doubt; because he mentions Muhammad in his age, then returned to mention that it was not long before his prophethood and the age of forty.
Footnote:

1 Mahmud Muhammad or praiseworthy means (A).